703-222-3333
Divorce
As one of the largest law firms in Virginia solely dedicated to family law, we are here for you.
Request A Consultation 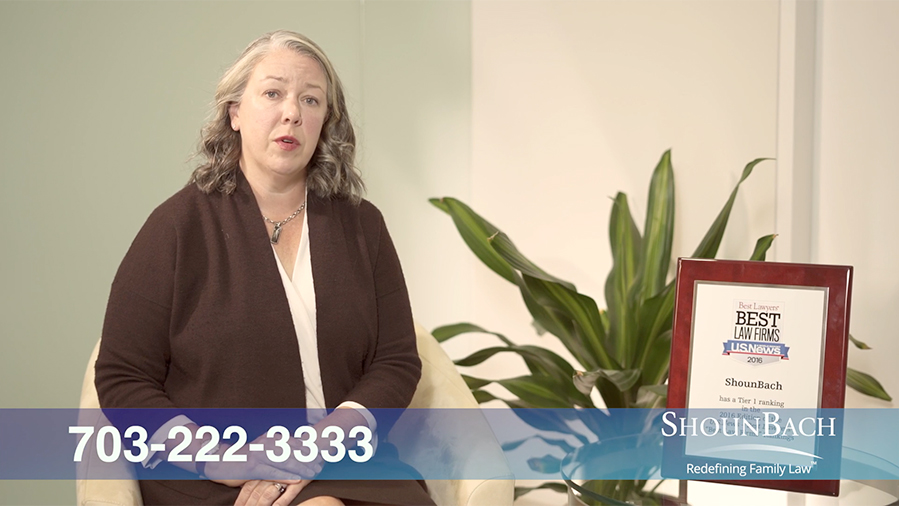 Divorce can be a painful and emotionally taxing experience. Even if a divorce involves an amicable parting, or has prenuptial agreements, it can still cause a great deal of distress for spouses, children, and others. Most divorce cases are contested to some extent. High conflict divorces involve fierce arguments about various aspects of the divorce, such as property division, child custody, or child support. The good news is that you do not have to fight your way through the divorce process alone. Hiring a divorce attorney can ease your tensions and provide you with an advocate to fight or negotiate on your behalf. An experienced family law attorney will know the process, legal jargon for family law cases, and the most likely outcomes based on their experience. ShounBach is a family law firm with years of experience advocating for our clients in Virginia divorce cases and other matters throughout Fairfax County and other Northern Virginia areas. Contact us for the best outcome for you.

The Difference Between Divorce and Legal Separation in Virginia

Many states offer multiple methods for spouses to separate in a legal sense. While Virginia law does not recognize “legal separation,” it does allow two different kinds of divorce.

Many states allow spouses to opt for “legal separation” instead of divorce. A typical divorce completely dissolves a marriage. It addresses issues like property division, spousal support, child custody, and child support. The spouses have no further legal relationship with one another, except possibly as co-parents.  In Virginia, this is called a divorce a vinculo matrimonii.

While Virginia law does not have “legal separation,” it does have a divorce a mensa et thoro, which means from bed and board.  This divorce acts similarly to “legal separation.”  Some people may opt for legal separation because of religious beliefs or other concerns that make them not want a final divorce. Spouses are still “married” to one another under the law, and therefore cannot remarry. They live separately, though, and have most of the other rights that come from a divorce. A court may order a division of property, make arrangements for child custody, and award spousal support or child support.

People may choose separation as a trial run for divorce. Most states that recognize legal separation make it fairly easy, legally speaking, for spouses to reconcile with one another.

As mentioned before, Virginia divorce law does not recognize legal separation as a distinct status. It does, however, allow two different kinds of divorce, depending on the circumstances.

Virginia allows “no-fault divorce” in which neither spouse has to prove wrongdoing. A no-fault divorce in Virginia requires the spouses to have lived apart for a minimum period of time. State law allows another kind of divorce in certain situations where a spouse cannot wait the required amount of time to file for a no-fault divorce.

Divorce from Bed and Board

A divorce from bed and board is similar to a legal separation. It allows for most of the relief that comes from a full divorce, such as property division, alimony, and child custody and support. The spouses will still be legally married, however, and cannot marry someone else until the court grants a “divorce from the bond of matrimony,” as discussed below.

This type of divorce requires evidence of a fault-based ground for divorce, meaning that a spouse has engaged in one of the following types of misconduct:

Divorce from the Bond of Matrimony

A divorce from the bond of matrimony fully dissolves the marital relationship, leaving the parties free to marry other people. It can be a no-fault divorce if a spouse can prove that they and the other spouse have been separated for a minimum period of time:

This kind of divorce may also be available on fault-based grounds, regardless of whether the spouses have already separated:

* In order to be granted a divorce from the bond of matrimony on this basis, one year has to have passed since the incident.

What Happens in a Divorce for Virginia Residents?

In order to be eligible for a divorce in Virginia, either you or your spouse must have been a resident of the Commonwealth of Virginia for at least six months prior to the date that you file your complaint for divorce. If you are seeking a divorce from the bonds of matrimony, you must also meet the requirements regarding separation described above.

Once you meet these requirements, you can file a complaint in the county or city where one of you resides. Your case will either be an uncontested or contested divorce.

Circuit Courts handle divorce cases in Virginia. Although they often come up in the context of divorce, other issues such as child custody, child visitation, child support, and spousal support can also be heard in the Juvenile and Domestic Relations District Courts in Virginia.

What Are the Fault-Based Grounds for Divorce in Northern Virginia?

Fault-based divorce requires proof that a spouse has engaged in certain forms of misconduct.

Adultery is one of the most common fault-based claims in Virginia divorce cases. It is also one of the hardest to prove. It requires “clear and convincing evidence,” a higher burden of proof than other fault-based grounds because it can have a serious impact beyond the divorce itself. It can be considered a criminal offense and can result in a complete bar to the offending spouse’s request for alimony.

State criminal law defines adultery as “voluntarily…hav[ing] sexual intercourse with any person not his or her spouse.” It is a Class 4 misdemeanor, the lowest category of misdemeanor offenses, punishable by a maximum fine of $250. The fact that adultery remains a crime in Virginia can allow the offending spouse to plead the fifth when facing allegations of adultery.  The decision to do so is best made in consultation with an experienced attorney.

Cruelty is one of the grounds for divorce from bed and board in Virginia, which does not require the spouses to have been separated before filing. State law generally defines cruelty as bodily harm that endangers a person’s life or health or conduct that places a person in reasonable fear of this kind of harm.

In order for desertion or abandonment to count as a ground for divorce, it typically must have lasted a year or longer, and there must be evidence that the spouse who deserted the other had malicious intent. A spouse who is gone for over a year because of a military deployment likely does not meet this definition, nor does one who has left out of fear of abuse by the other spouse.

Criminal Conviction of a Felony

A spouse may obtain a divorce from the bond of matrimony if they can prove that their spouse has been convicted of a felony and received a sentence of imprisonment for one year or longer.

How Does Contested and Uncontested Divorce Differ in Virginia?

In an uncontested divorce, the spouses either have come to an agreement on all of the important issues in the case, or they are working on reaching a settlement. A divorce case is considered “uncontested” under Virginia law if the spouses have a written separation agreement that addresses the necessary issues, particularly property division, spousal support,  child support, and child custody.

The spouses in a contested divorce are not in agreement on some or all of the issues. Their disagreement could stem from specific issues, such as property division, or grounds for divorce like adultery or cruelty. They may need assistance from a divorce attorney to negotiate an amicable resolution, or they may need a court to decide the issue after various hearings and a trial.

How Are Assets Handled in a Divorce in Virginia?

In Virginia, “marital property” is most property acquired by the spouses during their marriage.  There are a few exceptions for things like inheritance and gifts from third parties. The same goes for debts incurred during the marriage. The process of property division in Virginia involves an equitable distribution of marital assets and debts.

Please note that “equitable” means “fair.” It does not necessarily mean “equal.”  There is no presumption of an equal division of marital property in Virginia.  Courts will consider numerous factors when deciding how to distribute assets and debts, including:

Who Receives Custody of Children After a Divorce?

Courts must base decisions regarding child custody on what they believe will be in a child’s best interests. They should also try to “assure…​​frequent and continuing contact with both parents, when appropriate,” and to “encourage parents to share in the responsibilities of rearing their children.”

Do You Have to Pay Alimony in Northern Virginia?

Alimony, also known as spousal support, may be available as part of a divorce. Spouses in Virginia are financially responsible to one another, meaning each has a duty to support the other. A court may order one spouse to pay alimony to the other based on various factors, including:

A court may award alimony on an indefinite basis, or for a defined period of time. It must be awarded at the time of divorce. A spouse cannot petition to receive alimony at a later date. The obligation terminates when either spouse dies or the spouse receiving alimony remarries, if it had not terminated earlier based upon an agreement of the parties or a defined duration of the spousal support award.

How Will Hiring A Northern Virginia Lawyer Benefit Me in a Divorce?

There are benefits to you in filing for either an uncontested divorce or a contested divorce, with an experienced attorney. Experienced divorce lawyers offer many benefits, including knowledge of the procedure and preferences of the local courts, dedicated legal representation based on their experience, and an ability to identify and deeply understand the legal issues that are present in a divorce case and anticipate those that may come up in the future. The confidentiality of the attorney-client relationship allows a spouse to discuss their concerns openly and freely and receive unbiased legal advice. A divorce attorney can also help guide the spouses through a collaborative negotiation process, mediation, or they can advocate for their client’s interests in the courtroom.

If you have questions about divorce, the divorce lawyers at ShounBach are available to help. We handle a wide range of family law matters, including military divorce, as well as estate planning and other practice areas. We have been included in Super Lawyers, Washingtonian Magazine, and the U.S. News list of Best Law Firms. With law offices in Leesburg and Fairfax, we can assist people dealing with family law issues throughout Vienna, Tysons Corner, Alexandria, Falls Church, Arlington, Manassas, Mclean, and the Washington D.C. areas. Contact us or call us (702) 222-3333 today to find out what our legal services can do for you.

Map/Directions
Get In Touch

The information on this website is for general information purposes only. Nothing on this site should be taken as legal advice for any individual case or situation. This information is not intended to create, and receipt or viewing does not constitute, an attorney-client relationship.